This serial killing duo should probably be more talked about than it is. I recently read about this one a few years ago, and it has stuck with me since. Carol Bundy (no relation to Ted) and Doug Clark, known as the Sunset Strip Killers went on a killing spree in the summer of 1980, resulting in the death of at least 9 people.

Carol Bundy had a troubled childhood, and was seemingly destined for a life of crime. She was abused by her family and married to a 56 year-old man. By the time the killings began, she’d been married and divorced 3 times and had two young sons. Before the killings, Bundy had an affair with Jack Murray, her apartment complex manager and a country singer. Bundy even tried to bribe Murray’s wife to leave him. She also became obsessed with Murray, having elaborate fantasies about their life together.

Doug Clark was the son of a U.S. Naval officer who lived a life of privilege. He attended a Swiss boarding school as a child and traveled the world with his family. Clark showed signs of psychopathic behavior from a young age. He would often lie to his parents, and as a teenager, he would record himself having sex with girls and show the footage to his friends. Clark joined the Air Force in 1967. After he was discharged, Clark drifted and worked as a mechanic, all while calling himself “the king of one-night stands”. He moved to Los Angeles and met Carol Bundy in 1980.

Bundy and Clark met a bar in L.A. where Jack Murray would often perform. After spending a short time together, Bundy and Clark moved in together and soon discovered one another’s dark sexual fantasies. They had a very volatile and abusive relationship rooted in jealousy. Clark had a habit of seeking out divorced women with self esteem issues and essentially becoming a mooch, which is what he did to Carol Bundy.

This is where it gets super gross, don’t say I didn’t warn you.

In June 1980, Clark admitted to Bundy that he killed two teenage girls, Gina Narano and Cynthia Chandler, who he picked up on the Sunset Strip. He forced them to perform oral sex on him, shot them in the head, raped their dead bodies in a garage, and dumped them on the Ventura Freeway. They were found the next day. Bundy, growing apprehension, called the police claiming to have knowledge about the murdered girls, but refused to give them Clark’s name.

Twelve days later, Clark killed two more sex workers in the same fashion, Karen Jones and Exxie Wilson. This time, Bundy didn’t call the police. Clark kept Wilson’s head in the refrigerator. Bundy put makeup on the head, placed the head in a wooden box, and dumped it in an alley. It was found the next day. Clark had also killed another sex worker who was found three weeks after Exxie Wilson and Karen Jones were killed, making her her the first known victim. While all of this was happening, Clark was having a sexual relationship with the eleven year-old girl who lived next door, who be bribed with money and gifts to keep their relationship secret from everyone but Bundy.

A month later, Clark and Bundy went to go see Jack Murray after his performance at a local bar. Bundy hinted at what she and Clark had been doing. Murray threatened to call the police. Bundy later claimed she’d been joking and in exchange for not reporting them, Bundy offered him sex. Jack said he would only if there was another woman. Warning! Again, it gets more disgusting. Bundy brought the eleven year-old neighbor with her for the encounter. Apparently, all these people are scumbag pedophiles. Bundy refused to let Murray have sex with the girl, she believed that was only for Clark. It was then she decided Murray had to die.

Bundy psyched herself up to kill Jack Murray as a way to prove her devotion to Clark, as well as prove she was smart enough to kill on her own as Clark often berated her intelligence. On August 3, 1980, Bundy went back to the bar where Murray was performing again. She lured him into her van with the promise of sex with her and the neighbor girl. She shot and decapitated Murray in the back of her van. She took the head home with her in a plastic bag, believing the bullets in his head would lead back to her.

On August 20, Bundy broke down and confessed to a co-worker who called the police. Bundy, a nurse, had escaped from the hospital where she worked and was on the way to Clark’s work at the Jergen’s factory. When she arrived, she told Clark she was turning herself in. She offered him all her money so he could get away. Bundy and Clark had already been questioned in Murray’s murder, and Clark had given an alibi for Bundy. When Bundy left the factory, Clark called the police and recanted his statement about the alibi. Bundy soon called the police herself and turned them both in.

During questioning, Bundy confessed to the crimes and claimed to have enjoyed killing Jack Murray. Clark, on the other hand, was smug, arrogant and tried to claim Bundy was crazy, that they had never had a romantic relationship.He also claimed Jack Murray and Bundy had been committing the murders all along and that Bundy was trying to frame him. However, there was already too much evidence linking them together.

They were both found guilty of the murders. Doug Clark was charged with seven murders total and sentenced to death. He is still currently on death row in California. Carol Bundy testified against Clark in exchange for a shorter sentence. She received twenty-five years to life. She died in prison in 2003.

Doug Clark still claims his innocence and is still blaming the murders on Bundy and Jack Murray. He also denies ever having a romantic involvement with Bundy and believes DNA evidence will soon exonerate him. Good luck with that, buddy.

Look for a post about serial killer collectables, aka murderabilia soon!

In researching this, I couldn’t find any information about the eleven year-old girl. I can only hope she is living a good life now and is mentally healthy.

Carol Bundy’s behavior is baffling, even to a true crime weirdo. Roy Hazelwood, the famed FBI profiler who taught us everything we know about Forensic Psychology, has a study and theory on female accomplices, mainly to sex offenders. Hazelwood’s study claims these women suffer from low self-esteem and are focused on pleasing their male partners who are the instigators in the crimes.

Hazelwood developed a theory which includes the following processes that turned these women into accomplices:

Thanks for sticking around and reading that (if you didn’t, I don’t blame you). Here’s a basket of smooshy-faced puppies to cheer you up. 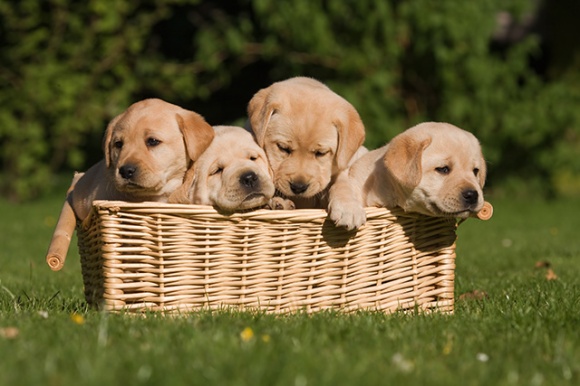 2 replies on “Couples Who Kill: The Sunset Strip Killers”

Bundy is one that’s always disturbed me. The lady is as bizarre as they get.
I think Hazelwood’s explanation is top simple for many of these codependent conspirators. The women probably most likely are already all those things by the time they find a partner in crime.
So much to digest with Bundy, and women like her. I’d offer a vast majority of them are already predisposed to kill, and they are only on the fence because they lack the, oh I don’t know the word, I don’t want to say courage or balls,because murder is a cowardly act, but I think finding a partner who’s more aggressive brings out what’s already in these women.
Just throwing my thoughts out.